Rio de Janeiro. How you’ve just blown our minds. Having spent the past six weeks venturing through Peru, Bolivia, Chile, Argentina, and now Brazil, we spent the last four days in the most amazing place we’ve come across so far.

We’d obviously been looking to finishing up our South American adventure in Rio. When we looked at travelling this continent and started our planning, it just seemed like the perfect place to end up after six weeks of travelling, with it’s beaches and perception of being a lively place. The perceptions ended up being spot on. It was a place that had everything. And it was beautiful.

We got to Rio in the afternoon after spending most of the day travelling across from Ilha Grande. As the highways turned into busy city roads, and as we approached one of the most beautiful and talked about cities in the world, one thing made us realise that we were approaching the place we’d seen and read about so much on TV and in books: a mysterious yet familiar figure from the top of a mountain in the distance. At first, it took a few seconds to sink in, but soon after we both realised and it hit home: Christ the Redeemer!

I don’t think there’s a better way to acknowledge your arrival into unknown territory than to spot a familiar yet never-before-seen structure towering far in the distance on top of a mountain. It was an amazing sight, and a great welcome to the city for us.

We settled into the city right away, wandering around Ipanema at night and taking in the atmosphere all around us. And it was still warm! We had got used to the evenings becoming a bit chilly in the evenings before Rio, so this was a nice welcome. Strolling next to Ipanema Beach whilst there were still volleyball games being played, and cyclists and rollerbladers gliding past in their own lanes, we liked the place straight away.

We started our time in Rio the next day by taking in some of the city’s main tourist sites, and we headed straight to Rio’s most famous sight, Cristo Redentor (Christ the Redeemer), on Corcovado Mountain. It was constructed in the 1920s, and has since become an icon of Brazil, and part of Rio’s identity. And it’s simply an awesome sight from anywhere you see it in the city. Although the mountain and the area surrounding the statue is unbelievably busy, the sight of the statue is simply amazing. It’s one of the few ‘wow’ moments you get when you come across beautiful landmarks and architecture for the first time. We squeezed in and around the swarms of people to get a good view of the statue, and took in the famous views of Rio and Guanabara Bay whilst we were up on Corcovado Mountain. Rio had amazed us already in our short amount of time there.

View from halfway up Corcovado Mountain 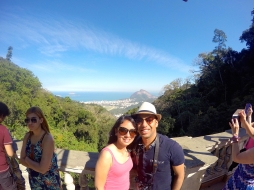 View from halfway up Corcovado 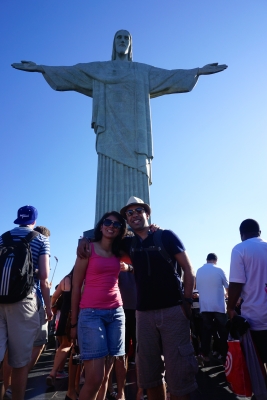 View of Sugarloaf from Christ

Jesus and the Moon

Whilst jostling around the crowds up there, Karina saw something that made us both reflect the nature of visiting this monument. People were shoulder to shoulder, taking selfies with the statue in the background (including us!), and making a lot of noise, as any famous tourist attraction would have people doing. With all this going on, she saw a young boy from afar, probably no more than 6-7 years old, look up at the statue, clasp his hands together and bow his head in prayer, and then get whisked away by his mother. The fact that we were at a religious landmark of Christianity had momentarily left us in all the chaos. It was a nice moment to witness.

We spent the rest of the day visiting other famous landmarks, such as the the bizarrely shaped Cathedral, which had a brilliant interior, the iconic white Lapa Archway, and the selarón steps (made famous by the Snoop Dogg and Pharrell music video “Beautiful”). The steps were cool. Tiles that are mostly yellow, green and blue, with some depicting further artistry. It was the brainchild of Chilean artist Jorge Selarón, whole lived there up until his death in 2013. And the archway of Lapa we’d see again, when we went at night to Lapa to see it’s nightlife and street parties come alive.

Stained glass mosaics inside the cathedral 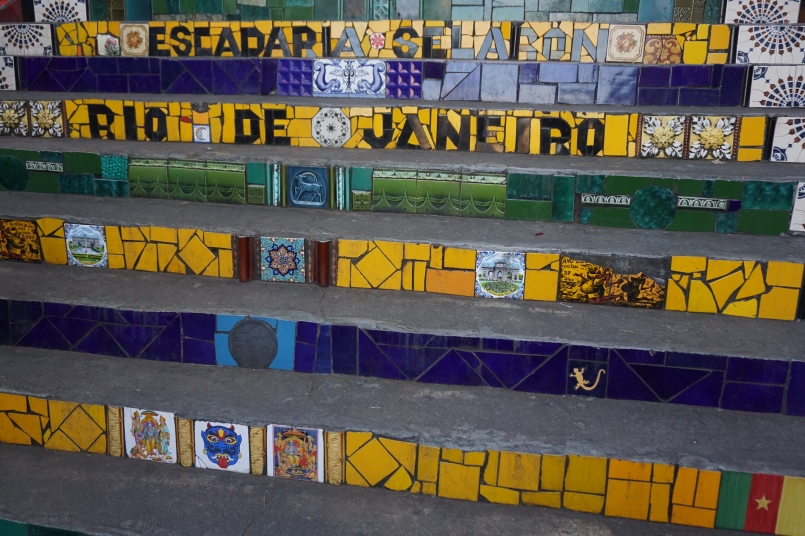 As the sun went down and darkness started to take over, we made our way up to Sugarloaf Mountain, which consisted of getting two cable cars with a lot of waiting around (it’s the next busiest landmark after Christ).

Once we were up at the top of Sugarloaf, night had fallen over Rio, and the views were breathtaking. Lights seen all along Copacabana beach, and Christ’s statue with it’s white luminous glow. The sight was amazing. 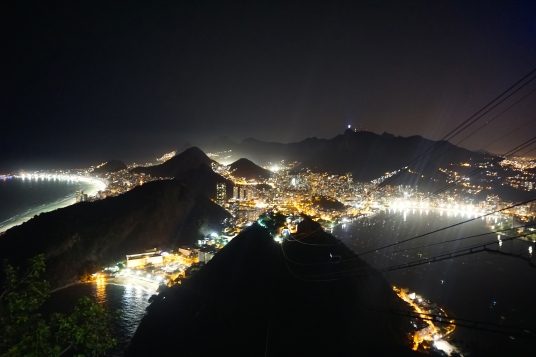 Rio from Sugarloaf. Copacabana on the left, Christ on Corcovado at the back

We decided the next day to take one of the city’s Favela Tours, which was great. They took us up to Rocinha, the city’s largest favela, and another smaller favela. They introduced us to the people of the favela and their way of life. Rocinha is the famous favela where they filmed Fast and Furious 6, but has quite a turbulent history with a drug lord having control of the place up until not too long ago, running the area as a dictatorship. The government decided to clean up the place recently and try to give the people of the favela a better quality of the life.

Rocinha seen from above is amazing. You can see all the top of the shacks, but hardly anything on ground level. The place is so tightly packed! 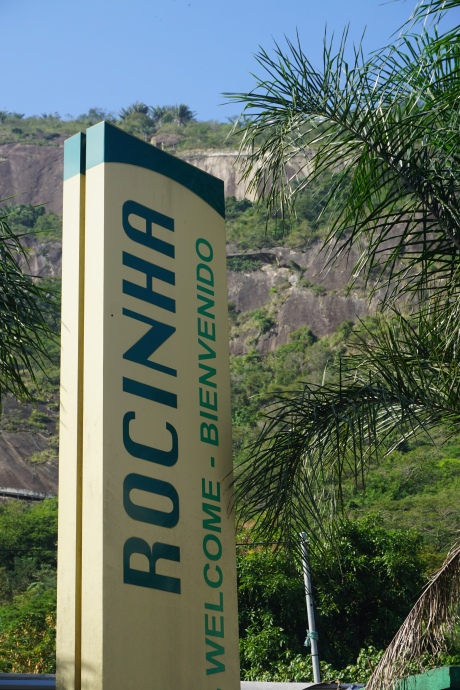 We didn’t actually go deep into Rocinha as there still continues to be tension between the Favela Police and the gangs, with gun fire not uncommon even during the day, but the smaller favela we visited we got to walk around the narrow alleyways, visit a school (unfortunately the kids were off school) and get a feel for the place. It was a definitely a completely different way of life, but it worked. There was a great sense of community watching all the people. 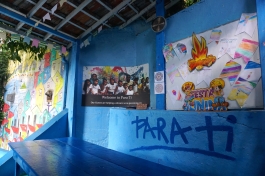 We then made our way up to Parque das Ruinas in Santa Teresa, where this park housed an old Colonial mansion that had been restored and turned into a tourist place where you could get a 360 degree view of Rio. Although we’d already had great views from Cristo and Sugarloaf, this one was definitely worth going for. 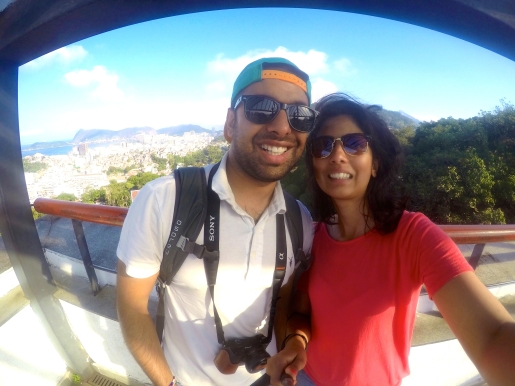 We spent a few hours then walking around Gloria, Santa Teresa and Lapa again. We had a good time experiencing their chilled out vibe, where there was a lot of street art, music and food to be enjoyed. At one point, we found ourselves walking up a street that was dead quiet and saw no one for around ten minutes. A pretty unique thing to come across in a place where there seems to be people and noise coming from all directions.

On the topic of street art, it’s everywhere in Rio! A lot of the stuff was football related too. Here’s some of the stuff we came across. We saw this green head everywhere Next to Lapa Arches This one in Lapa was my favourite

Under one of the Arches 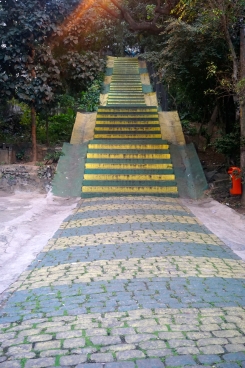 And what would a trip to Rio be without taking in some of the beaches? Luckily, we were in Ipanema during our stay, and we spent a good amount of time checking out Ipanema Beach, and it’s famous counterpart Copacabana Beach. 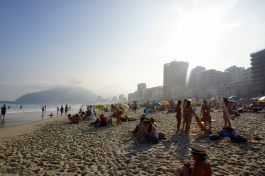 The beaches were a cool place to chill, with foot-volley games (volleyball played using anything but your hands and arms) and beach football games played everywhere you looked. And their skills were amazing! I tried getting some of them on video. But otherwise, it was a nice place to relax.

One of the highlights for me of our trip to Rio was to get to go to the Maracana Stadium, the famous stadium which had been completely revamped for the 2014 Football World Cup held last year.

Me and the Maracana

In fact, on researching the place and visiting it during the daytime, we actually managed to end up booking two tickets to see one of Rio’s famous teams play, Fluminese. It wasn’t until the actual day of the game that I realised that Fluminese had just signed a footballing legend and a former World Player of the Year, in Ronaldinho! This was just getting better and better! On the day of the game and once inside the Maracana, the atmosphere was unbelievable, louder than I’ve ever heard before (Villa Park hasn’t had much to get loud about in the last few years to be honest..), even more impressive considering less than half of the stadium had been filled.

Arriving at the stadium And we both noticed that the fans weren’t just men aged from 18-60 semi-drunk chanting semi-offensive chants at the opposition fans (in fact, alcohol isn’t sold inside the stadium so there weren’t many drunk but definitely some ‘jolly’ fans around!), but in fact the crowd was the sort of crowd you’d expect queueing at a kids theme park, with it being a very family oriented place. The fact that this was the case and the atmosphere was still greater than I’ve ever experienced before, it was a good insight that football games could easily be an occasion for the whole family. I think the fact the Ronaldinho was playing his first game for Fluminese had something to do with it, but nonetheless it was pretty impressive. The game ended 1-0 with Ronaldinho getting an assist, and the home fans were crazy after the game. The experience of seeing a game at the Maracana will always be something I’ll remember. It was a fantastic stadium, and we both had a great evening there. And so our time in Rio, Brazil, and now South America had just come to an end. The last six weeks were unbelievable. We made some wonderful friends, ate some of the best food we’ve ever tasted, and saw some of the most breathtaking sights we’ve ever seen. Six weeks sounds like ages but it whizzes by. We had a great experience travelling this great continent, albeit fairly quickly. We learnt a lot, and have now picked up some good tips for the rest of our travels. And so with very heavy hearts, we leave Rio. Thank you South America. I’m sure we’ll both see you again, and hopefully very soon!