We loved Chiang Mai. The presence of temples and the encounter with elephants had really left us at peace. The exotic yet calm feel of the city was hard to leave behind, but once again we found ourselves packing our bags, and heading back on the road. Our destination was a city known to be even more throwback than where we had just come from, with the sounds of monks chanting as you walk through the streets a very common occurrence. But to get there, the best way wasn’t to get a train, plane, or to even go by road. It was to get there by boat, by taking in an epic two-day journey along the most iconic river in South East Asia, the Mekong River.

Before we got started on our Mekong adventure, we first had to get to Chiang Khong, a small fishing town along the banks of the Mekong River, in Northeast Thailand. This town was our final stop, before heading into Laos the next day.

We left Chiang Mai in the early morning, and headed up to Chiang Khong district. A pretty convenient and relatively cheap ‘all-in-one’ type ticket bought us travel up to Chiang Khong, a night’s stay at a local hostel, and then onto the slow-boat down the Mekong River. What we didn’t really realise was that we were going to be driving almost through Chiang Rai, and so we were pleasantly surprised when the driver told us he’d take us to the ‘White Temple’ in Chiang Rai before taking us to Chiang Rai that night. And we’re glad he did.

The Wat Rong Khun, or White Temple, is quite simply a stunning temple. The architecture of Wats in general are amazing, but this was the first temple that we stood in front of and could not take our eyes off of it.

The building uses white colour and glass pieces to reflect light back off it, creating the stunning scene. The temple is designed beautifully, and it’s when you get closer you realise it’s true brilliance. Put briefly, the temple was taken over by a Thai artist in the 1990s when it was struggling to keep up with running costs. The artist brought it back to life, with a message behind it. All over the Wat, there are stories being expressed to you through art. The man taking us to Chiang Khong told us that the temple taught and showed Buddhism through modern stories, such as wall art inside the temple featuring Harry Potter, Superheroes, and even Michael Jackson! The message that supposedly the art was trying to say was that man was simply evil, destroying a lot of the world, and sadly not even the superheroes watching all the action could do anything about it.

The art around the Wat was also striking, with a sea of hands reaching out the ground as you walked on the bridge to the main temple, and a half-half split of good and evil faces on entry into the complex. It was pretty mind-boggling stuff, but an awesome sight to take in. These were on the footpath as we approached Wat Rong Khun 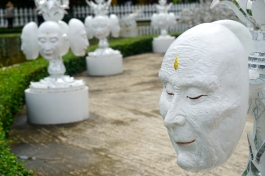 These were the toilets! Movie figures on the trees outside

We headed up to Chiang Khong after, and after a few hours of driving past green fields as far as the eye could see, we got to our hostel.

We dumped our stuff in the rooms, and went for a stroll into the town, quite literally a small stretch of road parallel to the river, consisting of a few restaurants, shops, and even a bar!

We headed over to the riverbank and got our first glimpse of the mighty Mekong River, a river that stretched all the way down to the South China Sea from here. It was a very peaceful place to be.

Chiang Khong was a place people came for trade, so it was a busy place for locals in the day, but at night time the place went pretty quiet. We found a nice little coffee shop where we passed our time, and finished the night off with a quick trip to Rin Bar Chiang Khong, where you’d get the Laos-bound group of tourists gathering for an evening of drinks and chat. We had a pretty fun evening winding down and chilling out playing pool. Shout out to the wild guy that was Danny and his partner Rin for their hospitality! The next morning, we crossed over into Laos via Huay Xai, a tiny town on the other side of the Mekong (the river acts as a border between the two countries). After passing through the border, and a few hours of waiting around, we were finally shifted onto a great long wooden boat, along with fifty or so other travellers from all over the globe. As the chatting commenced between the different groups of travellers, the Mekong River slow-boat slowly drifted away from Huay Xai.

Our journey was going to take us two whole days, and so there was a lot of time to kill! Luckily though, sitting on foam car seats, on a long wooden boat, whilst watching the most amazing surroundings go past you in slow motion, was a breathtaking experience. The phrase ‘watching the world go by’ was made for times like this.

We saw local families on their small boats travelling from village to village, or small groups on their fishing boats catching their dinner for that night. It was pretty back-to-basic type stuff. It was nice to see.

And surprisingly, after spending hours staring outside at the green hills and the villages on them, exchanging numerous travel stories with other excited travellers, and attempting to solve an impossible rubik’s cube-like puzzle for what seemed like hours, we had finished half of our boat journey and arrived in Pak Beng, a small riverside village where we would stay the night. 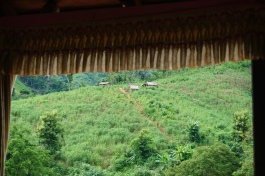 How do you solve this thing?!

The journey on the slow-boat in Laos can’t be done in one day, so you stay half way in Pak Beng, and it’s a very laid back settlement on the banks of the Mekong. They’re always ready for the tourists to arrive, and there are plenty of guesthouses to choose from to stay the night. It’s a quiet, simple village, so there wasn’t really much to do, but we had a wander around and enjoyed the simpleness of it. 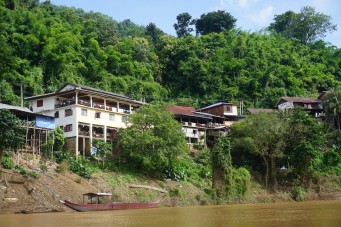 I think for Karina and I, Pak Beng will always stand out in our memories as the place that gave us the most surprising and disturbing encounters with insects and animals. Being on the banks of the Mekong, it was home to all sorts of small creatures, some I’m not even sure to this day what they were. But I’m quite happy to leave it that way. Oh, I did mention that we’re not exactly comfortable with animals right?! From the small mysterious creature that ran across our dinner table out of the corner of ours eyes, to the giant moth that decided to appear out of nowhere in our room and cause a few minutes of havoc, to the still-unknown insect-type creature that was the size of a bird (I’m not kidding you!) stuck on the wall while we left in the morning, Pak Beng was an experience to say the least!

The next morning, we got back onto the boat with the sun beaming down on us, and proceeded down the Mekong further into Laos, getting closer and closer to our destination. All set to go again! 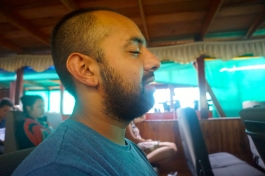 Not far out from our final stop, we passed two large caves that were famous for housing a large number of Buddha statues within in, the Pak Ou Caves. We didn’t stop here, but we managed to catch a glimpse of some the statues. The time passed quickly as our journey on the slow-boat came to an end. We soon reached the boat’s final stop, and prepared to get off. The slow-boat was an experience we’d recommend to anyone ever wanting to travel into Laos. It was a great way to travel if you had the time, and along the way you get to see some amazing landscapes and have a very peaceful few days. It was more comfortable than we thought! We did also meet some cool people from different parts of the world. It was on this journey however that we felt for the first time to be a bit embarrassed to be tourists/travellers. The slow-boat seats are bought up by the tourists who arrive on the boat, with the locals having to settle for a place on the floor on the hard wooden deck. These would include men and women that looked well into their 70s, along with pregnant women and small children. It didn’t sit right with us that because we paid the money, or even got on the boat first, we should enjoy the privilege. A lot of travellers carried on with their conversations as normal, a French girl for example ignoring the pregnant Laotian lady with her two-year old child sat at her feet. We felt pretty uncomfortable with the whole thing to be honest, and the French girl was one of multiple examples of how the ‘western’ tourists ignored the situation of the humble Laotian locals. In the end, we did manage to make space for some of the locals who were sat on the floor after encouraging some of the travellers to do the same, so in this case you could say everyone was happy. But the whole episode gave us food for thought, and we had a feeling this wasn’t the last time we were going to encounter the ignorant attitudes of some of the travellers we came across.

As we left the boats behind, we looked ahead, to the city where the French influence was still alive and kicking. Where else in the world could you go and back in time, and witness an endless line of Buddhist monks lining up on road receiving alms at 5 o’clock every morning, and then for breakfast sit at a café roadside and have a coffee and a croissant so good you might as well be in Paris? Oh, we were looking forward to this. We had finally at the magical city that was Luang Prabang.