In the week leading up to Santiago, me and Karina  were discussing how we were  going to spend our few  days in the area. We’d pretty much come up with an  itinerary that would let us spend a comfortable two  days in the city of Santiago  and then we’d move onto Argentina. But then Valparaiso got mentioned by many  people to us in Santiago, and I’m so glad it did.

It was first described to us as a place nearer the beach, but then not being huge beach lovers, we thought we might give it a miss and spend another day wandering around Santiago. But then I checked back on recommendations from friends, and read a bit more about it, and we decided it might be worth taking the two-hour each-way journey to Valparaiso, and seeing it for ourselves.

Valparaiso, or ‘Valpo’ as the portenõs (people of the port) say, first came to prominence around the 1850s when ships travelling between the Atlantic and Pacific would use the area to stop over, booming even more so during the gold rush era, with many Europeans immigrating as a result of the area’s new found wealth. However, once the Panama Canal opened, Valpo lost most of it’s wealth overnight with a mass exodus of the wealthy. In the last twenty years or so, Valpo re-invented itself as a cultural hub, home to many prominent artists, poets, and musicians, and in the process, earning UNESCO World Heritage Site status.

The beauty of Valpo has to be seen to be believed. The narrow cobblestone alleyways, the views of the port and the Pacific on top of the many cerros (hills), the colourful architecture, and my favourite, the most amazing street art visible every time you turn a corner. It was an amazing place to just stand and look at. Add to that the street music, the food, and atmosphere, and the place really is a cool place to be. 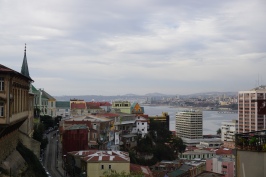 We ventured up a few of the city’s many cerros, using the funiculars (cable cars). These are wonderful little wooden cabins, perched at a steep angle to carry people up and down the hills. Think of a really steep but small railway, and you’ll get what I mean. It’s a piece of old engineering that’s still in use today.

After getting to the top of the cerros, it was nice to just wander around and get lost in the alleyways, encountering amazing murals on the side of houses and restaurants. These aren’t graffiti, but commissioned pieces of art by the owners of the building to street artists, many of whom have made a name for themselves not just in and around Valparaiso, but some, like a guy called INTI, around the world. Check out some of the pictures of them, some of them were unreal.

We saw this first… 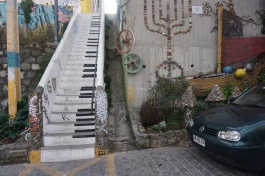 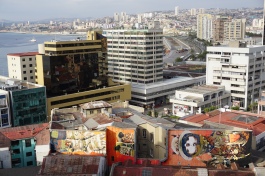 Valpo..with an INTI mural on the building at the bottom 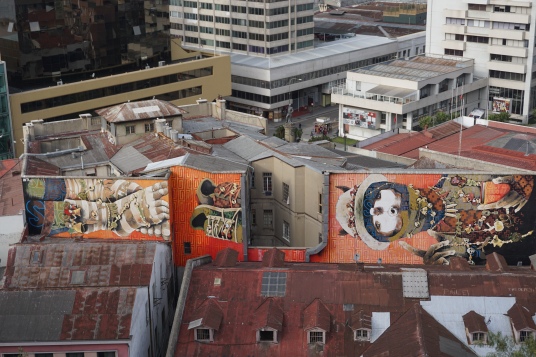 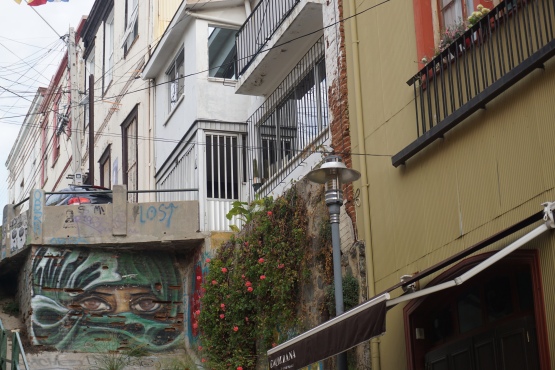 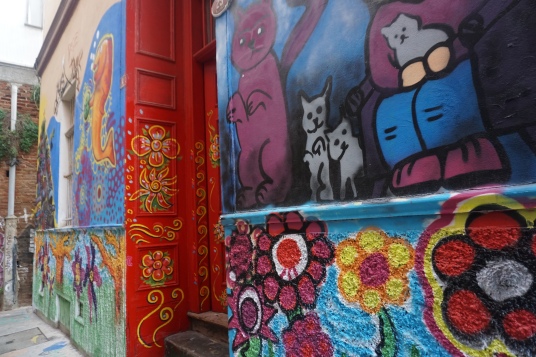 After a fantastic day of wandering around and exploring Valparaiso, we finished off by having a few fresh sopaipillas, a fried pastry made from pumpkins and flour. These were amazing!

Karina hypnotised by the sopaipillas

Regarding Valpo, I would recommend anyone coming to South America to see this place. It was really cool to end our time in Chile here. But once again, it was time to move on. And we were now headed east over the Andes mountains and then straight back down, to the city of Mendoza, the wine capital of Argentina!

Leave a Reply to Ravi and Karina Cancel reply