I first read about Buenos Aires in a Disney book Mom and Dad got me as a kid about countries. I remember the different Disney characters going to different countries and detailing in story about what there was to do in those places and their capital cities. For some reason since then, Buenos Aires has always stuck in my mind, and I’d finally arrived here with Karina to see it in person, a place that seemed like a million miles away when I was younger.

Since then, the urge to see Buenos Aires grew, influenced by growing up hearing of Diego Maradona and the nation’s people and their passion for football, along with the great restaurant and nightlife scene.

As soon as we got to Buenos Aires, I could already tell this was a very European-influenced city. Lima, La Paz and Santiago definitely had architecture with Spanish influence when we went to those cities, but Buenos Aires had much more than that. It actually felt like you were in Europe. And we found out a little later why that was.

We started our first day by taking a walking tour (yes, another one!) around the centre of Buenos Aires. It took us around to the main buildings in the centre, which were all pretty cool. The thing is, we had already been vast European-influenced buildings already in South America, and although very big in size, the architecture was something we’d already seen and appreciated. It was the story of Buenos Aires and their approach to creating the city when it was first found, that had me interested. Our tour guide explained that since they created the city in 1580 at the second attempt (originally Buenos Aires was founded in 1536 but the Spanish were forced away by the indigenous people), they’ve always wanted to compete with Europe. Everything Europe had, they wanted, but bigger and better. Which is why everything in the main centre was huge! They created buildings with so many different influences, from French, to Roman, to Spanish. It was a big mish-mash of different types of European architecture everywhere. Even when creating the roads, they had the main road linking the Presidential Palace to the National Congress modelled on the Champs Élysées, with the same style ‘plane’ trees lining both sides of the footpath. 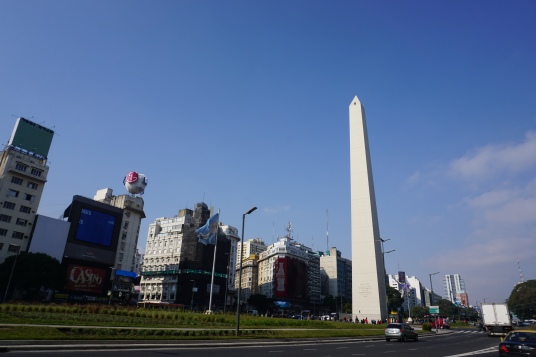 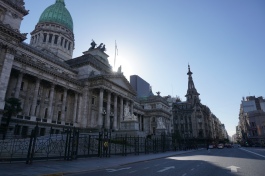 It was modelled on Parisian cafés

Talking about bigger and better, the avenue running through the city, 9 de Julio, is the widest avenue in the world, with up to nine lanes in each direction. It’s fair to say we had an eventful and long walk that afternoon, but very interesting and a nice history lesson to get us introduced to the place.

Another bit of history told to us was Buenos Aires’ love for Eva Perón, or more commonly known as Evita. She was a radio and film personality in Argentina in the 1930’s and 40’s. After marrying a top ranking military general in Juan Perón, who would two years later go on to become Argentina’s President, she became quite powerful in Argentina, and popular especially amongst the poorer population, due to her voicing and opinions on labour rights, women’s rights, and running charities. This led to her running for Vice-President in 1951, and received a lot of support from the working-class and poorer people. However, she withdrew her candidacy after a short absence, making a famous speech just before her death from cancer, which would eventually take her life at the young age of 33. She is thus loved amongst the working class of Argentina, and people still hold her close to their hearts. The ministry of health building two large steel portraits of her one two of it’s side, one facing north and one facing south. Facing the north side, the wealth side of Buenos Aires, it seems as if the portrait is scowling aggressively at it’s habitants, a nod to Evita’s struggle in fighting the rich of the city. The portrait facing the south side, facing the poorer areas, she is smiling. It was a nice story to learn about her and her life, and the steel portraits on the Ministry of Health building gave the story a nice touch.

We headed over to San Telmo Sunday Market, a very popular sunday market that went on for many blocks, which sold things from arts and crafts to street food to clothes. We found a few cool things there, and got a Crepe topped with Dulce de Leche (a very popular Argentinian topping for desserts. It’s basically a very sweet, thick caramel sauce). This was absolutely amazing! We had a nice time walking around that day, it was such a good vibe.

We even came across a mini-drum party on the street in San Telmo. People were going nuts! Amazing atmosphere that evening.

On Monday, we headed out to visit Buenos Aires’ number one tourist attraction: The Recoleta Cemetery. When we first read about this, we were quite surprised, and then intrigued. The Cemetery is the final resting place for a lot of prominent men and women from Argentina, including Evita herself. But what makes this cemetery quite different from other is that the tombs are very large monuments, most the size of a large garden shed and some two or three stories high. The monuments are designed carefully, and in the end, the cemetery appears as a small town in itself, with streets and alleyways. It was a peaceful place, and we didn’t stay for long, but were encouraged to pay the place a visit due to it’s popularity and beauty. 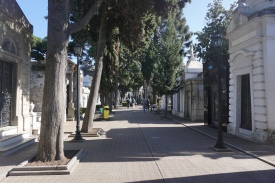 At night, we ended up going to a famous drum show that takes places every Monday in Buenos Aires, La Bomba de Tiempo, or The Time Bomb. It features a series of highly skilful drum musicians, who are orchestrated by a conductor using over seventy different hand signals. We’d heard a lot about it, and seemed like a cool way to start off a night. The venue was cool, with a large open space as soon as you get in, with plenty of surrounding bars serving drinks and food, a very street party-like atmosphere. It kind of reminded me of Digbeth, the industrial-turned nightlife area of Birmingham with it’s warehouse converted clubs. It felt like home for a second!

The show soon got underway, and the music was brilliant. They had so much energy, and to see the conductor do his stuff was so good. A highly recommended show if you’re ever there on a Monday. We took quite a few videos so you should get a feel for what it was like being there. After that was dinner at Don Julio, a famous Argentinian restaurant in Palermo. There was a queue to get in, and no waiting area, so they gave us blankets to keep warm outside, along with a glass of champagne to keep us occupied! Great service. And great food in the end too!

Day two in BA had us walking over to Puerto Madero, a waterfront area where they’ve converted a while load of old industrial buildings into a waterfront area with into a trendy area with cafés, bars, restaurants, and some very expensive apartments. It was a good place to enjoy a stroll at and go for a coffee. We didn’t manage to get here at night time, but we would imagine it would be a very busy, sociable area. 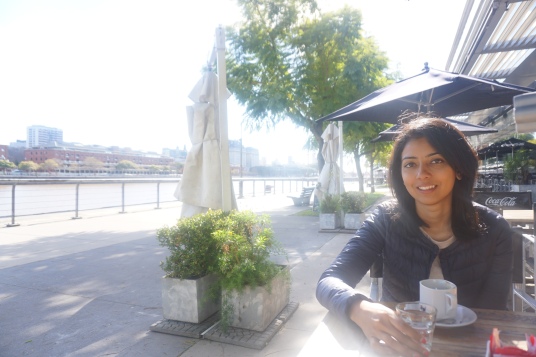 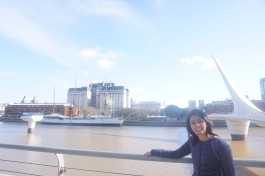 Before we had arrived in Buenos Aires, I’d read about a famous pizzeria that I’d now really wanted to go to. El Cuartito had become famous down the years for it’s pizzas loaded with cheese, and the laid back, sports themed interior they had in the place. A lot of famous celebrities had also eaten at this place. They had memorabilia from all different sports, but expectedly the most from football, including a signed Maradona Argentina shirt. So, we’re now on our way to El Cuartito, in fact just ten seconds round the corner from it. I’m so hungry by the way, and anyone that knows how much I love pizza, will understand that I’m now picturing eating the pizza, walking even quicker, thinking there’s not much that’s going to stop me from stuffing my face with margherita in the next five minutes. About to walk into the restaurant, something else actually grabbed our attention just opposite from El Cuartito, leaving Karina and I pizza-less for the next two hours..

When anyone sees a camera crew, be it one camera man and a reporter, naturally people get intrigued. You usually poke your head around, see if you can get a hint of what’s going on, stick around for a bit, then carry on with your usual life and walk on (to maybe a pizza place?!). But when you see around thirty camera men on ladders surrounding an apartment entrance, with thirty reporters, and numerous other photographers and film vans with satellite dishes, with even more onlookers on the footpath and road, you end up walking straight in that direction, taking up a spot between one of the many cameramen, and hang around for over two hours waiting to see the action happen.

Hmm..there’s something going on here.. 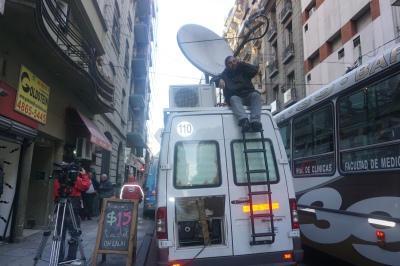 And when you try to ask an onlooker what might be happening (in my not so fluent Spanish), and they reply several words back to you, one of which was ‘Maradona’, you basically forget what pizza actually is, and all of a sudden don’t mind camping yourself there all night, just to get a glimpse of the probably the most famous, and possibly the greatest, footballer who has ever lived.

That was the initial feeling anyway. We heard the name Maradona get mentioned multiple times, and slowly we became convinced that we were going to see the great man, who for some reason was in the apartment block.

Soon after, a Dutch tourist appeared and we eventually found out that it was actually Claudia Maradona (Diego’s ex-wife) and her daughter inside, who was meeting with her lawyers to discuss the divorced settlement that her and Diego were going through. It was national news. After all, this couple were like Posh and Becks multiplied by hundred! I was a bit let down at first, especially after waiting around for an hour or so. But in the end, we stuck around, got a few pictures with famous Argentinian reporters, and even got some videos of the lawyers and Claudia getting into their cars. My new career as a paparazzi was off to a solid start!

This guy’s a top reporter in Buenos Aires apparently! 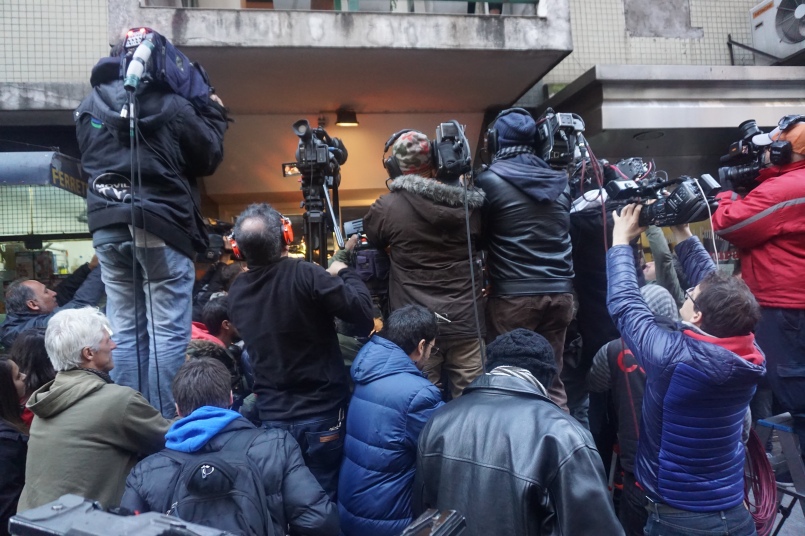 Having remembered why we were in the area in the first place, we finally got to El Cuartito! Better late than never I guess! 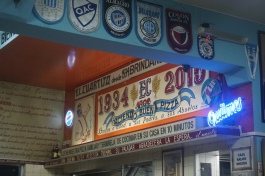 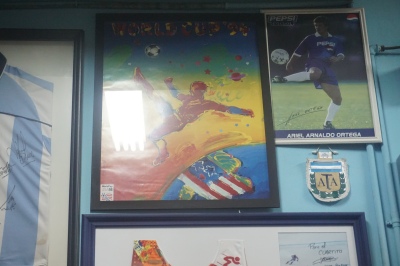 We were now off to the famous waterfalls of Iguazu, where we would be spending our last day in Argentina visiting the Argentinian side, then heading across the border into Brazil Speak soon!